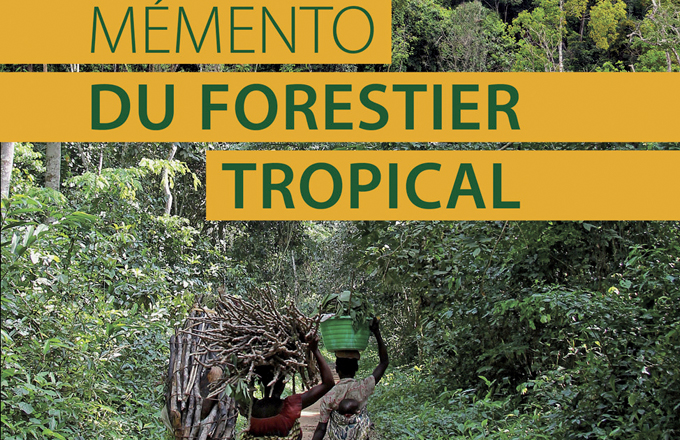 A Vade Mecum for the 21st Century Tropical Forest
Share This

A revised “Handbook for the Tropical Forester” has been published. This source book had not been updated for over 20 years. This new edition incorporates the new challenges facing rainforests.

“There are 90% of new content compared to the previous edition, which dated from 1989”, Gilles Mille says, about the new Mémento du forestier tropical, released in French (“Handbook for the Tropical Forester”). A forest and environment consultant, he is one of the two coordinators of the book, with Dominique Louppe, researcher at the French International Cooperation Centre in Agronomic Research for Development (Cirad). Published late 2015, the new edition of this 1,200 page-handbook was presented at the Agricultural Show, held in Paris from 27 February to 6 March 2016.

The book aims at being a technical compendium for the sustainable management of tropical forests ecosystems. Its realization involved, between 2011 and 2015, about a hundred of authors, including over 50 from Cirad. Popularization and completeness are probably the two highlights of this manual.

Forests, placed on the European and international agenda

Since the last update of this handbook, 26 years ago, forests have become a fully-fledged issue in the international political agenda, although no specific global convention is dedicated to them. On the ground, with the rise of the corporate social responsibility concept, governance of tropical forests has “improved in operated units” according to the authors. However, a section of activities still remains outside this process. Another general trend lies in the involvement of communities in the management of their forests.

Internationally, the Kyoto Protocol was adopted in 1997 and entered into force in 2005. It resulted in greenhouse gas emission targets. Forestry projects involve more than 20% of carbon credits traded on voluntary markets. However, financing tools such as REDD + come up against weak national institutions or land systems complexity. On top of that, international negotiations on carbon credits have reached stalemate.

Among existing tools against illegal logging, the handbook cites one that is “innovative and promising”, the FLEGT European Union Action Plan, standing for “Forest Law Enforcement, Governance and Trade”. FLEGT was launched in 2003 and acts on both the supply and demand for wood, supporting legal channels.

The book is also a practical guide to forestry. It calls for taking into account biodiversity in forest management, as well as pests, links to agriculture, low-impact logging techniques.

“Forestry of tomorrow will, [...] more than ever, take into account the balance between the production of goods (wood, non-timber forest products) and the preservation of services (biodiversity, carbon)”,

The book addresses the entire chain, including botany, agroforestry, processing and packaging of wood, wood energy. Note, the undeniable success since the early 2000s of tropical timber in outdoor applications, such as floor covering. Finally, a chapter is devoted to the forest as a cultural heritage and to the sacred forest.

New areas for research and technology

However, the subject is far from exhausted. Regarding plantation forestry, the Handbook highlights the lack of updated scientific knowledge. The authors point out that “only a better understanding of ecological, reproductive modes (lack of seeds is indeed an important brake) and behaviours will help expand the range of potentially useful local species in plantations”.

Technical innovations are also expected, for example via satellite, in order to follow closely forest worksites. The book quotes:

“In particular, the sensors equipping the platforms of the future Sentinel-2 constellation, that will monitor tropical forest areas every five days, in stable angular conditions (notwithstanding cloudy conditions).”

Such issues are all the more topical that tropical forests keep on losing ground. It is estimated that forest loss, between 2005 and 2015, amounts to more than 6 million hectares annually.