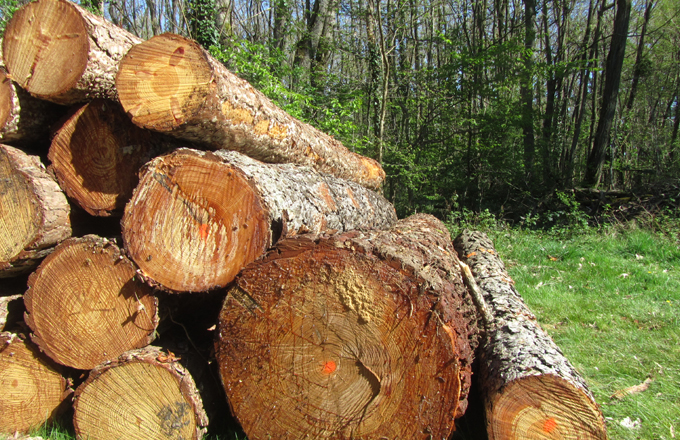 The French 2016-2026 strategy for the forest-based sector aims to harvest an additional 12 million cubic metres of wood. Among other challenges, it also looks ahead to adaptation to climate change and ways to boost exports.

To harvest an additional 12 million cubic metres of wood by 2026 is one of the key targets of the French 2016-2026 strategy for the forest-based sector. This national plan for forest and wood was endorsed on March 8, 2016, by the High Council of Forest and Wood, the sector’s advisory body.

This growth in yearly wood harvests would correspond to 65% of natural increase. Stakeholders intend to address the underutilization of both public and private forests. They put forward a climate-resilient forest, a more competitive forest industry, as well as a willingness to listen to expectations of society. This comes against the backdrop of five major challenges for the next decade.

1. To fit the forest for climate change

Climate change is expected to come along with increased risks to forests.

• Regarding fire hazard, the plan underlined that “it is crucial to maintain the resources currently allocated to the policy of suppressing incipient fires”.

• A national storm crisis management plan is to be drawn up.

• Upcoming work is also expected to preserve the role of forests in avalanche and land movements protection in mountain regions, as well as erosion protection in coastal areas.

Research and experimentation are awaited, through observation, monitoring, modelling, as is the announced platform dedicated to genetic resources.

Furthermore, forestry has to adapt to climate change, “without delay”. This involves the gradual introduction of species or varieties, with a view to a more resilient forest.

Ongoing works intend to broaden knowledge about forest ecosystems services. “It is necessary to assess precisely the full range of services, for each forest area”, the plan noted. A future compendium is expected to combine with the current EFESE project (“French Assessment of Ecosystems and Ecosystem Services”).

Furthermore, as recalled by the document, “the forest industry is a bedrock of bioeconomy (materials, chemicals, energy from renewable biological resources ...)”.

“The strong growth of ungulate populations (red deer, roe deer and wild boar) compromises in many regions the renewal of forest stands with negative consequences on the economy and biodiversity”, the strategy document pointed up.

The plan looks ahead to a series of measures in order to strengthen the dialogue between foresters and hunters. Forestry also has a role to play in this field, by means of practices that are yet to be defined.

The plan calls for promoting the land consolidation and crossing boundaries between public forests and private forests. It suggests “experiments in management and mobilization”, as already announced by the Minister Stephane Le Foll.

An IT platform project aims to provide “networking or forest management services”, and bring together economic and map data for private and communal forest.

Streamlining of forest management procedures is on the agenda. Current heterogeneity of management documents, in both form and substance, is considered a brake on mutualisation.

The national forest and wood program “accompanies and complements” the sector’s contract concluded in 2014 for three years by the Wood Strategic Committee. A key objective is to address exports weakness.

The enhancement of hardwood stands out as a priority for the forest policy. Even though hardwoods constitute two thirds of the forest in metropolitan France, they still have to gain competitiveness vis-à-vis tropical timber imports or softwood products.

The modernization of production is another strand of action, in order to improve economic performance as well as working conditions.

New tools are being developed. This includes a mapping of supply logistics, an official quotation of round wood, an official database of forestry works prices.

In addition, the plan discussed a better structuring of the sector, the strengthening of training, actions for promoting wood, and a forest and timber diplomacy abroad.

The program ensued from the Act on agriculture, food and forestry of 13 October 2014. It has yet to be subject to the Environmental Authority’s scrutiny and to a consultation public. It will then be incorporated at the local level, through regional plans.